But in Dickinson, Emily’s life cleverly becomes a commentary on today. The show’s anachronisms serve to show the relevance of issues like women’s rights and racial equality, issues being discussed in the 1850s, in today’s world. The storylines educate millennials, whom the show is aimed at, on parts of American history like the Missouri Compromise and the Know Nothing Party (“These Know Nothings, says one character, “Turns out they might know something! They might win! It turns out people like it when you tell them who to blame for their problems.”) A shooting that took place on the floor of Congress over slavery is discussed by the characters in the first season, a moment that becomes even more poignant now. Hailee Steinfeld as Emily Dickinson, as shown in her bedroom writing, now streaming on Apple TV+.

Emily, played by actress and singer Hailee Steinfeld, presents her as a woman out of place in her era. She’s not looking for marriage, she wants a career to call her own, she doesn’t mind not fitting in, and is attracted to both men and women (this latter point is based on the poems she wrote to her sister in law). But, Emily doesn’t go too far outside the box either. She has her brother enter the town’s local poetry competition on her behalf. She assumes she will live in her father’s house her whole life and she turns down an opportunity to go out West with a boy she does not love even if it is a means of escape. Classic literature infuses the show. Emily reads Thoreau and other writers avidly (even taking a “road trip” to Walden Pond). Louisa May Alcott comes to dinner and is supposedly inspired by the Dickinson household to write Little Women. The kids enact Shakespeare’s Othello, with the Black servant playing the lead. Emily’s real poems become titles for the episodes and are spoken in voiceovers. They also serve as plot driving elements. The words, in a handwritten script, flit over the screen and disappear into the ether, much like our real-life understanding of Emily Dickson. Modern-day music, including pop, hip hop, techno, and other genres, is an essential element of the show’s aesthetic. And so, in fact, the important question Dickinson seems to ponder is whether history can be made cool for today’s youth. Once you get past the jarring incongruity of the dialogue against the visuals, it seems to work and about halfway through the first season, the show really hits its stride. Some moments are downright hilarious, like when Emily discovers that Thoreau is not really living in isolation up at Walden Pond at one with nature. Not only is the pond a popular spot for locals, Walden’s mother is doing his laundry and his sister brings him food.

Most of the reviews have been positive, if not outright raving. The New Yorker calls Dickinson “both deeply weird and dazzles gradually” (we second that). Forbes describes it as “Absurdist tragicomedy” and “The Best Thing on Apple TV+” and The Verge calls it “the wildest, weirdest, and most earnest show on Apple TV Plus.”

The show uses humor to poke fun at those historical customs now strange to the modern viewer, like marrying your cousin which was all the rage back in the day. Emily’s aunt announces at the Christmas dinner, “As soon as my late husband/cousin died…”). In the Old Bethpage Village Restoration, the producers of Dickinson found an ideal 19th century town all ready to go as a filming location with farmland, barns, houses, stores, rustic wood fences, and more. The only thing that was missing was a house for the Dickinsons, and so a replica of the actual home in Amherst (now the Emily Dickinson Museum) was built at Old Bethpage for exterior shoots. Although Old Bethpage Village Restoration is currently closed due to COVID, you can actually go on Google Maps to see the filming location for the exterior of the Dickinson House. It appears to have been taken before the set was finished, only showing one floor. The rear of the house is unfinished, and likely remained as the show only uses the front and left side of the Dickinson house. From Google Earth historic imagery, construction on the house began in early 2019. The interiors of the Dickinson house were built on a soundstage at Kaufman Astoria Studios in Queens, one set for each floor. Dickinson‘s showrunner Alena Smith told Architectural Digest, ““Since Emily is a person that lived her whole life in one house, it was really important that each of the rooms be its own character—and its own kind of magic. Women’s lives were confined to these domestic spaces.” The interior is not reproduced exactly as the original house, but key items are the same, such as Emily’s writing desk and her twin-size bed. The Dickinson family (and guests) at a Christmas dinner in Dickinson, now streaming on Apple TV+.

For everything else, the set design is rooted in the historical era so it feels period but is executed with more zest, in terms of color, pattern, and material, that make everything jump off the screen. Much of the house is created from materials by companies from the time period and still operating, including Zuber, a French decor company founded in 1797 that made the wallpaper in the dining room, and companies like Adelphi Paper Hangings, and the Thomas Strahan Collection.

Loren Weeks, the production designer on Dickinson told Architectural Digest, “Since Dickinson was going to be a contemporary interpretation of the poet, I decided that we didn’t need to approach the design as a historical re-creation. I wanted to be honest to the historical period, but not beholden to it. As it turned out, the majority of finishes we used were period-appropriate with the introduction of contemporary wallpaper, fabric, or color here and there.” 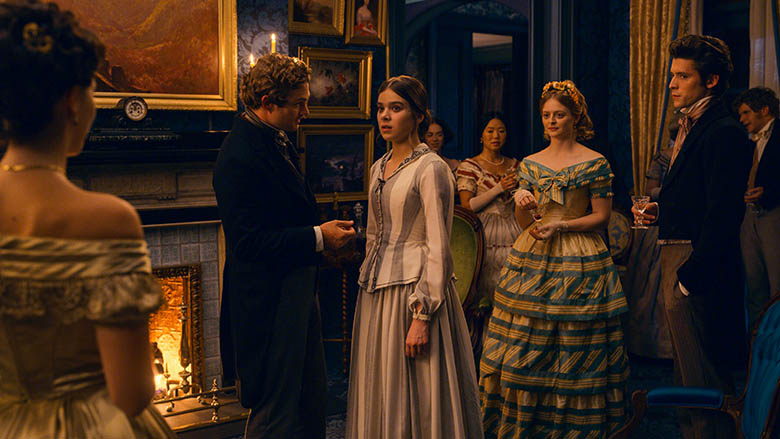 A party at the Dickinson house. Photo courtesy Apple TV+ At Old Bethpage Village Restoration, not only are the buildings preserved, but you can also see actual recreations of the activities that would have taken place in such a village on Long Island in the 1800s. Volunteers come in period dress and play the roles of blacksmiths, woodworkers, farmers, teachers, cooks, and others. They explain to you about life during that time and demonstrate how to do things like cut wood or make the food of the era. A view of a historic pre-Civil War home The first three episodes of second season of Dickinson is now streaming on Apple TV+, where you can get a 7-day free trial and binge the first season too!