The CTV ad market has risen to the point where this year’s upfront spending will equal the whole amount spent on CTV three years ago. Streaming providers are seeing an increase in upfront investment. According to eMarketer, upfront CTV ad expenditure will increase by 34.6% to $6.41 billion this year. This is roughly how much was anticipated to be spent on total CTV advertising in 2019 based on eMarketers‘ initial forecast. 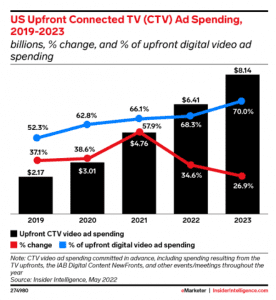 This year, CTV will account for more than two-thirds of all upfront digital video ad expenditure in the United States for the first time. In other words, streaming providers receive the vast majority of upfront digital video dollars. While CTV isn’t quite the same as digital video, it consumes an increasing portion of digital spending. Approximately one-third of overall CTV ad spending is spent upfront. CTV ad spending in the United States will reach $18.89 billion in 2022.